Two days ago while I was traveling to Kaushambi office from C.P. office in metro I got a call from Vikas﻿ saying that Santosh﻿ is critical and they are going to Fortis, Gurgaon. At first I couldn't believe him. Just a day ago Kiran﻿ had told me that Santosh was better and was responding very well to voice commands. But he said that Arvind had tweeted this and they were all on the way.

In next five minutes I received more calls from Aniket﻿ and few others. Everyone was on way to Gurgaon. The first thought on my mind was to get down immediately and board the metro to Gurgaon. But I could not. I had some donation cheques which I had to give at Kaushambi office and I had already made the person wait for more than an hour. So I went to Kaushambi, gave it to Bipul da and caught the metro to Gurgaon.

During the entire hour and a half journey flashes of incidents in past two and a half year kept criss-crossing my mind. I had met Santosh for the first time at Jantar Mantar in April 2011. Even at that time she was known to be a firebrand activist with the strength to call a spade a spade.

After April 2011 all of us worked for grass root mobilization and Santosh was the one who used to give us tips. She had far more knowledge about the ground scenario than any of us. While attending the weekly volunteer meetings of IAC she would narrate the experiences she had while fighting the rashan mafia. How she was attacked multiple times and how she made Sheila Dixit run away with her questions.

Then in August 2011, when Anna was arrested, she along with most others was on ground mobilizing people while I along with 10 others was underground, away from all the action, acting as part of the IAC communication channel. One incident I specifically remember is of 21st August. Anna was into the 6th day of his fast and despite of public support across the country there was no communication from the government and Anna's health had started to deteriorate. 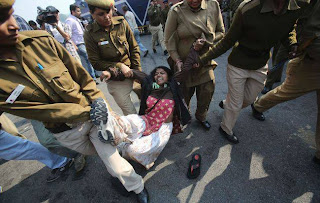 Anna spoke from the stage and said that if these politicians won't listen to our demands then we'll take the fight to their doorsteps. Within an hour I got a call from someone saying that about 40 volunteers were at 7, Race course road, PM Manmohan Singh's residence. I went to Arvind, informed him and asked him if I could go. He said, "Go, but don't get arrested."

I left Ramlila ground and as I expected I found Santosh at the crossing of 7, RCR along with 40-50 others which included Arunima﻿, Rolly﻿, Arun﻿, Bhupendra﻿ and many others. She was the one who had coordinated this effort and reached that far ditching the police. On seeing me she said, "Bhai, I'm going back to Ramlila ground to get more people, you be here."

That day was the first time anyone protested in front of PM house in the history of India's anti-corruption protest. All of us were detained and later released near Ramlila ground. The next day we went to then Finance Minsiter, Pranab Mukherjee's house and next day to that to Chidambaram's house in morning and Advani's house in evening. Santosh and few others were regular feature in all those protests.

In her own small way Santosh had made a difference. The places which were a strict no-no for protests started feeling susceptible and vulnerable. Even beefing up security measures and closing down metro stations had no effect.

Yes, it was Santosh who was trigger to this change! 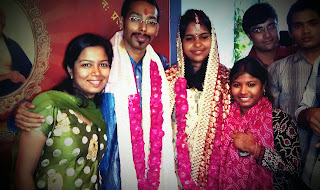 In May 2012 when I and Prerna﻿ decided to get married, Santosh was one of the first people I informed.
On the day of my marriage after Arvind did Prerna's kanyadaan she said to me, "Bhai I wish I have a marriage like yours."
"Yours will be better," I replied.

That day I didn't know that fate had something else in store for her!

Then in December Damini rape case happened. Few know that Santosh and her youth team, which includes but is not limited to Vandana, Hitashi, Vikas, Ankit Sharma, Sarita, Sanjeev, etc. was one of the first to reach Vijay Chowk and lead the protests.

It's her firebrand style of protest which has inspired people across India. Santosh was not someone who would be afraid of the police and their canes and tear gas. She was one who would take it all head on, even if she was alone. And she taught that to many, I apart from Arvind and many others are her disciples in that field.

Then in April 2013 the candidate selection process for Delhi Assembly elections started. When the question of Seemapuri constituency cropped up many of us had only one name in mind, Santosh. But she was reluctant. She didn't think she would be that good as a politician and wanted to continue the life of a rebel, a protester. But finally we were able to convince her and as expected .

I still remember that evening at Swati and Neveen Jaihind's house. It was a small get together and Santosh said to Swati, "It's very difficult. Earlier it was physical attacks but now they are trying to malign me. Saying that I charge people for their rashon." Swati consoled her, said, "Don't worry, you are worthy that's why you have been given ticket. You just do your work, that's the best answer to them."

Santosh continued with her campaign and then in 2nd week of June I got a call from Kumar bhai, asking where I was. I told him that I was at Kaushambi office to which he said. "Santosh is coming there. She has lost her phone and Arvind has asked me get a new phone. Come to me with her and then get her a mobile. I'll give the cash to you and you get her a phone."

Santosh came with Abid and we went to Kumar's home in Aditya's car. We sat for some time and then Kumar said, "I'm giving you the money, go and take a mobile. How much money should I give."
"If you are coming along then it's Ok otherwise I'm leaving," replied Santosh.

We bought a Samsung mobile of Santosh's choice and walked out of the shop. Then Kumar asked, "You could have taken this with Ankit, why did you call me?"

Santosh didn't answer straight forwardly which was against her nature. I was surprised as this is not how she was. I also insisted, "Yes, tell us, what's the matter?"

"Bhaiya the local MLA's aides have threatening me," Santosh replied to Kumar.

"Don't worry, the most they can do is that they'll not let you win, what else can they do?" Kumar replied.

"No, they have said they will kill me," Santosh replied nonchalantly.

We didn't say anything and changed the topic and then left soon-after.

After almost two weeks she met with an accident while coming to Kaushambi office. Soon after she crossed into U.P., the bike she was traveling on was hit by a car from behind. Santosh sustained severe head injuries while the person driving the bike, Kuldeep, suffered injuries in his hands and one of his legs.

She was brought to nearby Yashoda hospital by passers by and I being nearby reached within 10 minutes of the accident. Her situation was critical but the doctors Dr. Atul Gupta, Dr. Naresh Gupta and Dr. Vipin Mittal worked hard and made her survive. The golden hour, i.e. the first hour after the accident was utilized very effectively and she was operated within the first hour. This helped in Santosh's immediate survival after the accident.

After three days we shifted her to a bigger hospital for better care but finally after 37 days of struggle Santosh left us, leaving many questions unanswered. 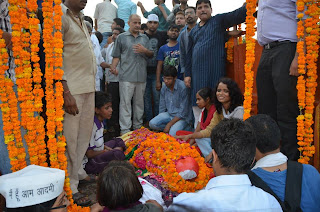 Santosh may have left us but many questions remain. Her dreams are still unfulfilled and it is now upon us to bring her dreams to reality. 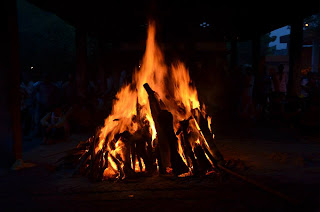 She may have left us but her memories will always be with us.
Posted by Ankit at 6:13 AM